As the gates to Disney California Adventure park crEEKed closed for guests earlier this week, cast members dressed in their villainous best took over in the bewitching hours for a creepy cast-exclusive preview of Oogie Boogie Bash – A Disney Halloween Party.

The devilishly delightful fun included interactive treat trails, the “Frightfully Fun Parade,” attractions and many other offerings guests will experience select nights through Oct. 31. (Tickets are sold out, but there is still more to enjoy during Halloween Time at the Disneyland Resort.)

Entertainment host Megan Djanbatian eagerly anticipated the parade, which only runs during Oogie Boogie Bash. “It’s always amazing, and there are some really fun [characters coming] this year. I’m pretty excited for that.” 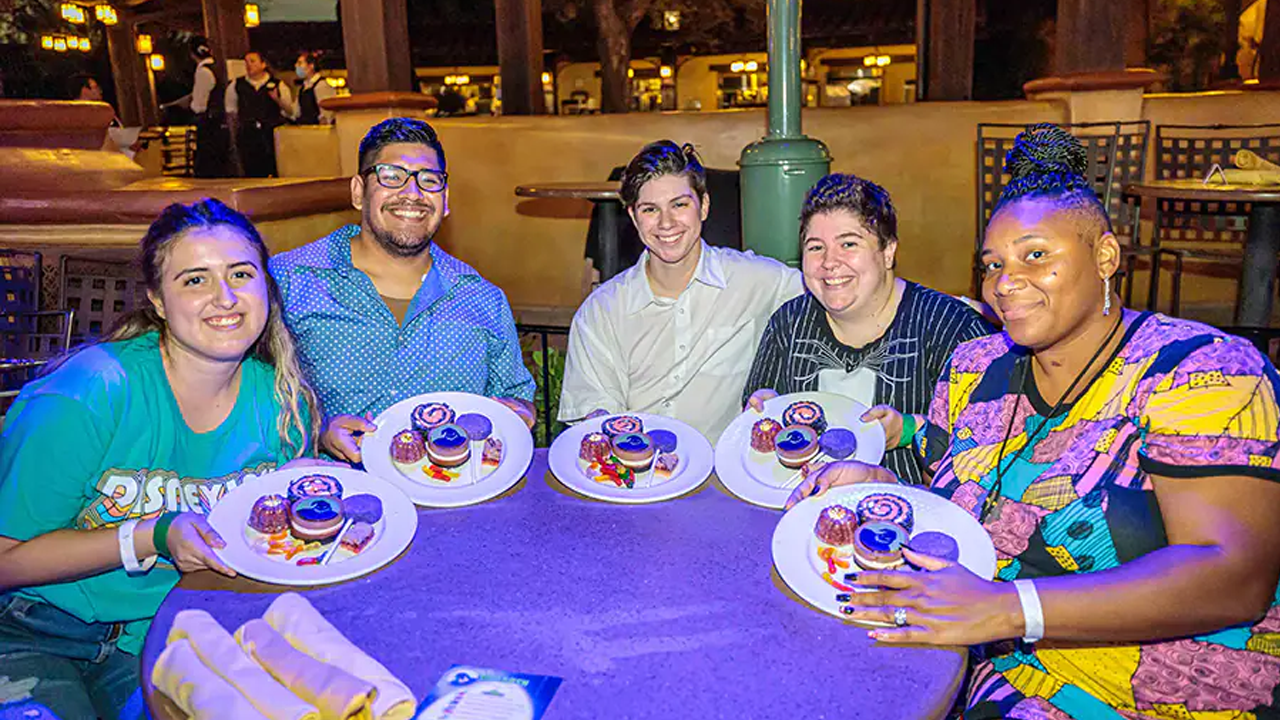 Cast were also first to encounter the new villains who’ve descended into the treat trails, including Madam Mim from “The Sword in the Stone,” Ernesto de la Cruz from “Coco” and Mother Gothel from “Tangled.” They also enjoyed new photo opportunities with Bruno from “Encanto,” plus Minnie Mouse, Daisy Duck and Clarabelle Cow dressed as the Sanderson Sisters from “Hocus Pocus.”

Meanwhile, there were only treats and no tricks at the Oogie Boogie Bash Dessert Party, where over 100 cast members were surprised with a preview of this tasty offering. Cast enjoyed Halloween-themed desserts and drinks while watching the parade from the Sonoma Terrace.

“I feel very lucky and excited to experience this,” said reservation sales agent Cheryl Harding, who was experiencing Oogie Boogie Bash for the first time alongside her sister, ticket sales and services agent Karen Shenett. Both said attending cast-exclusive events together is special for them because they get to spend time together and experience unique events.

“I really like that [the “Frightfully Fun Parade”] is unique and scary in its own way,” said retail stage manager Shelby Otwell. “[It has] unique characters that you don’t get to see all the time, like Dr. Facilier and all the villains at the end.”

The eerie presence of the Headless Horseman riding before the parade sent screams of delight through the crowd. Cast cheered on all their favorite floats, including the chilling gravediggers who scraped their shovels across the pavement in time to Haunted Mansion-inspired music.

Sufficiently spellbound by the end of the preview, cast members certainly had a scary good time!