Every year, Disney donates millions of pounds of food – including unserved, prepared meals from their parks – to local food banks to support people in the community facing food insecurity. Furthering this commitment, this week Walt Disney World Resort and Disneyland Resort announced significant donations to local community food banks to support families in need, totaling more than $300,000! Let’s journey from coast to coast to learn a little more.

Last week, Walt Disney World donated $100,000 to Second Harvest Food Bank of Central Florida – an organization we’ve teamed up with for more than 30 years. This most recent donation joins the $500,000 granted to the organization in honor of the 50th Anniversary celebration, helping to close the community’s gap of unmet needs through the organization’s powerful hunger relief network.

As part of our longstanding relationship with Second Harvest Food Bank of Central Florida, Disney remains focused on investing in future culinary storytellers within the Second Harvest Culinary Training Program. The program provides students with the necessary culinary and life skills to pursue a sustainable career, at no charge. Students from this program were in attendance as the $100,000 donation was announced and Disney also recently donated non-slip shoes to every student in the program, helping them take their first steps into their culinary future.

On the west coast, Disneyland Resort announced a donation of $5,000 to the Community Action Partnership Orange County (CAP OC) to support their OC Food Bank program during the beloved cast event, Minnie’s Moonlit Madness. It then came as a complete surprise to the clue-sleuthing crowd to find out from Disneyland Resort President Ken Potrock that we were also presenting OC Food Bank with an additional $100,000 check! 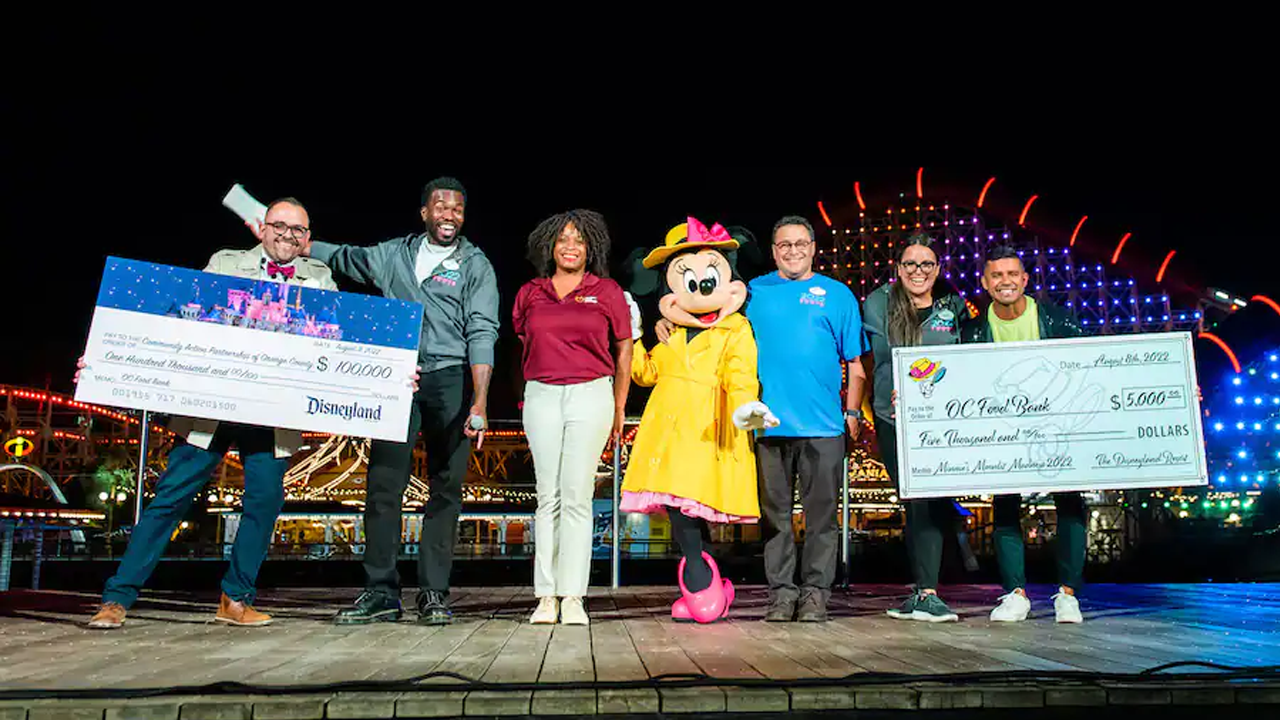 But that’s not all. To share the love, Disneyland Resort donated an additional $100,000 to Second Harvest Food Bank of Orange County just this week. We’ve supported the organization for nearly a decade through donations from resort hotels and banquets, as well as VoluntEARing several times per year at their Harvest Solutions Farm in Irvine, CA, and their food bank.

Disney has a long legacy of donating food to communities in need. Earlier this year, we made a contribution to Feeding America to support efforts to source more produce and increase the number of nutritious meals provided to children and families who need it most. Distributed across 30 Feeding America member food banks across the U.S., this grant will serve approximately 500,000 kids and provide over 3,000,000 pounds of produce.

It is such a privilege to work at a company that truly values giving back to important causes like hunger relief and I am so proud of Disney cast members on both coasts for dedicating their time to making a difference for those around them – both inside our park gates and within our community.

*According to the USDA, 1.2 lbs of food is equivalent to one meal.