GLENDALE, Calif. (Jan. 17, 2020) A team from United States Navel Academy, along with a team from Texas A&M University and a team from Savannah College of Art and Design walked away with the top honors from Walt Disney Imagineering’s 29thImaginations Design Competition. For nearly three decades, Imaginations has served as a prestigious design competition with the purpose of discovering and nurturing the next generation of Disney Imagineers from a diverse array of disciplines and skillsets. Founded in 1991 by former Imagineering executive and Disney Legend Marty Sklar, the program has alsogrown to include separate local versions sponsored by Hong Kong Disneyland Resort and Shanghai Disney Resort.

For this year’s competition, teams were challenged to create an iconic installation at the contestants’ own campus or city that served as an inspiration, honored the past, and was a vision of the future. It could be architectural, ornamental, static or active — whatever the team felt was the best way to represent their unique chosen location. The contest proved challenging with a focus on places that are already a part of existing communities. The designers had to consider how guests could have a communal and family friendly experience as a group as well as how traditional methodologies and advanced technology solutions would allow the experiences to be shared. They also had to be mindful to honor the environment, history, codes and local ordinances.

The competition also embraced both the intimate and grandiose of ideation — the guidelines were that the designs be appropriate for the location selected. In telling the very unique story of the chosen spot, it needed to respect and integrate local traditions and geography. This project also had to be a place to gather and celebrate, as well as reflect and educate the community — a concept that would go down in history as symbolic of the team’s campus or city. 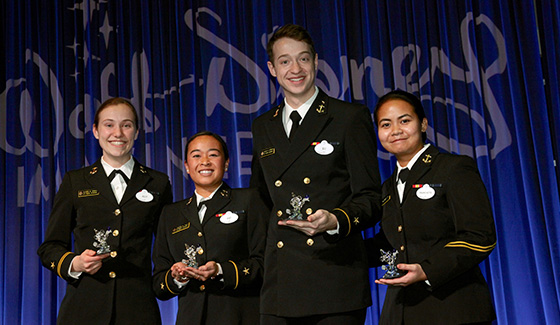 First place was awarded to Allison Annick, Elijah Vernon, Franchette Allarey, and Kathryn Fung from United States Navel Academy for Starboard Port, an installation raised off the coast of the United States Naval Academy in Annapolis, Md., the “Sailing Capital of the World.” It is a place of reflection, discovery and adventure. A wooden dock interspersed with fiber optic light that imitates the twinkling of the stars leads guests to a constellation of marble pavilions that stand in the Severn River. Overhead floats a string of meditative monuments, while beneath, slivers of life dedicated to the communities “above, upon and below” the sea await for all to experience.

Second place went to Abby Henning, Abby Zuber, Cecelia Gonzalez and Kennedy Behling from Texas A&M University for Here, a place where current, former and future students alike can gather to relax, reflect and remember the Aggies who came before them. On a sunny day, students can be found lounging on the grass steps in the outer rings of the installation, utilizing the space for studying, socializing and leisure. As guests enter the central bronze structure, they find themselves in a space of reflection, where a magical moment awaits. Once the sun sets, the installation is transformed into a glowing symbol of the strength and warmth of the Aggie spirit.

Chris Feliciano, John Manos, Nayelin Delgadillo and Oki Honda from Savannah College of Art and Design placed third for Urban Jewel, which restores and modernizes a lost public square in Savannah, Ga. as a modern gathering space for today’s community to learn, celebrate and interact with Savannah’s past, present and future. As a square for all, Urban Jewel offers a way for people of all ages and backgrounds to participate through gathering space, entertainment, interactive play and more.

The six teams of finalists received an all-expense-paid trip to Walt Disney Imagineering in California from January 13 to 17 to present their projects to Imagineering executives, meet and network with Imagineers, go behind-the-scenes to see how Disney magic is created, and interview for internships during their visit.

The projects were judged on mastery of skills and talents, guest experience, diversity and market perspective, uniqueness, and adherence to project challenge, The judges were looking for the ability to recognize the cultural nuances of the selected location, expanding the boundaries of what currently exists, and an evaluation of its business implications and impact on the community.

Judges also examined the teams’ ability to tell a compelling and engaging story, with broad appeal to a wide audience, and a knowledge and passion for Walt Disney Imagineering—where Imagineers blend storytelling with the latest technologies to create immersive experiences that delight families all around the world.

The Imaginations Design Competition attracts students from universities all across the United States, who are given the opportunity to display their talents to Imagineering executives. Many of them have become interns and fulfilled their dream of working alongside Imagineers, and some have even become Imagineers themselves and returned to serveas mentors for future Imaginations competitions.

Walt Disney Imagineering (WDI) is the creative force that dreams up and designs all Disney theme parks, resorts, attractions, cruise ships and other family entertainment experiences worldwide, along with overseeing the creative aspects of Disney’s games, merchandise and publishing businesses. Imagineering’s unique strength comes from its diverse team of creative and technical professionals, who build on the Disney legacy of storytelling to pioneer new forms of entertainment. For more information, visit the Walt Disney Imagineering website and follow @WaltDisneyImagineering on Instagram.

For more information on the Imaginations Design Competition, visit disneyimaginations.com